Start a Wiki
The AAI RQ-2 Pioneer is an Unmanned Aerial Vehicle, that was developed by the United States and Israel, to spot enemy ships. It is also used for battlefield reconnaissance as well.

The Aircraft takes-off using a catapult launcher with the help of a booster. It is recovered by a net for landing. But it is still possible for the RQ-2 Pioneer to take-off and land on conventional runways.

Since 1991 the Pioneer UAV absolved different missions, during conflicts in the Persian Gulf, Bosnia, Kosovo and Iraq.

It has a maximum flight endurance of 5 hours, while carrying a payload of 34 kg. Out of the United States it is operated by the Israeli Air Force and the Republic of Singapore Air Force. The RQ-2 Pioneer was operational by the US Navy until 2007, since then it had been replaced by the AAI RQ-7 Shadow. 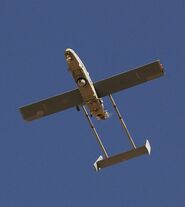 A RQ-2 Pioneer being recovered

An RQ-2 doing a catapult take-off

A drawing of the RQ-2 Pioneer

A RQ-2 Pioneer on the USS Wisconsin
Add a photo to this gallery
Retrieved from "https://aircraft.fandom.com/wiki/AAI_RQ-2_Pioneer?oldid=9559"
Community content is available under CC-BY-SA unless otherwise noted.