Start a Wiki
The AeroVironment RQ-11 Raven is a hand-launched Unmanned Aerial Vehicle, it used by the United States for Battlefield reconnaissance. It is also called Miniature Unmanned Aerial Vehicle (MUAV), because of it´s small size. The RQ-11 Raven is powered by an electric-motor and must be hand-launched by a person for take-off. The RQ-11 sends real time Night Vision device and IR videos to the base.

The RQ-11 Raven can be controlled autonomous using GPS waypoints or by a pilot at the ground.

After the RQ-11 Raven was successfully used in Iraq and Afghanistan, and was exported into many countries. Currently it is in use by the United States as the main operator and by Australia, Italy, Denmark, Great Britain, Lebanon, the Netherlands and Spain. 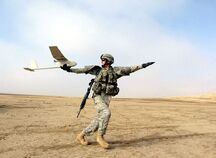 Add a photo to this gallery
Retrieved from "https://aircraft.fandom.com/wiki/AeroVironment_RQ-11_Raven?oldid=9401"
Community content is available under CC-BY-SA unless otherwise noted.