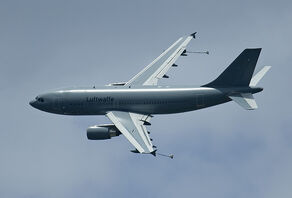 The Airbus A310 Multi Role Tanker Transport (MRTT) is an aerial refueling tanker aircraft based on the civilian Airbus A310. Previously, the A310 has been operated as a pure transport aircraft.

The A310 Multi Role Tanker Transport (MRTT) is a military derivative of the Airbus A310 airliner. It is designed as a dual-role air refueling tanker and cargo transport aircraft.

The aircraft are manufactured and modified by EADS/Airbus. The conversion involves

The design of the pod and wing reinforcements and systems was subcontracted to ITD SA, at that time part of the ITPGroup. The German Air Force (Luftwaffe) has become the first customer for the MRTT, converting four of their seven A310s. The Canadian Forces are converting two of their five A310s, which are known as the CC-150 Polaris in Canadian service, to MRTT configuration.

While the current MRTTs rely on probe/drogue refueling EADS has invested $90m in research and development of a boom refueling system such as that used by the USAF. They are now able to offer tankers from the A310 with refueling pods to the larger A330 MRTT equipped with refueling booms.

A310 MRTT is somewhat smaller than A330 MRTT. Since production of A310 airframes is over, it can only be made from refurbished airliners, or as an upgrade to A310's already used by Air forces (option chosen by Germany and Canada). As a tanker, it has very similar fuel capacity to KC-135R However, because of the larger cabin, it is much more flexible, offering good capacity for cargo, troop transport, VIP transport, or other use, lacking only the capacity to land on rough strips to qualify as a strategic transport. Airbus hopes to sell it to some of the countries that need to replace the Boeing 707's they use as tankers.

Retrieved from "https://aircraft.fandom.com/wiki/Airbus_A310_MRTT?oldid=9230"
Community content is available under CC-BY-SA unless otherwise noted.