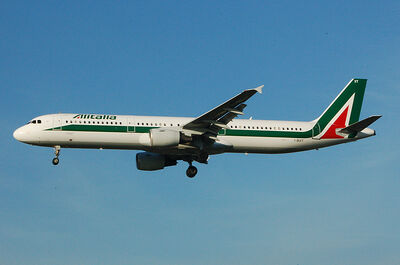 The A321 program was launched in November 1989 and the first development aircraft first flew on March 11th, 1993. European certification was awarded in December that year.

Other changes include strengthening of the undercarriage to cope with the higher weights, more powerful engines, a simplified and refined fuel system and larger tires for better braking. A slightly modified wing with double slotted flaps and modifications to the flight controls allows the A321's handling characteristics to closely resemble the A320's. The A321 features an identical flightdeck to that on the A319 and A320, and shares the same type rating as the smaller two aircraft.

The basic A321-100 features a reduction in range compared to the A320 as extra fuel tankage was not added to the initial design to compensate for the extra weight. To overcome this Airbus launched the longer range, heavier A321-200 development in 1995 which has a full pax transcontinental US range. This is achieved through higher thrust V2533-A5 or CFM56-5B3 engines and minor structural strengthening and 2900 litres (766 US gal/638 Imp gal) greater fuel capacity with the installation of an ACT additional centre tank.

The A321-100 first flew with Lufthansa in March 1994. The A321-200 first flew from Daimler Benz (later DaimlerChrysler, now Daimler AG) Aerospace's Hamburg facilities in December 1996.

Retrieved from "https://aircraft.fandom.com/wiki/Airbus_A321?oldid=16248"
Community content is available under CC-BY-SA unless otherwise noted.