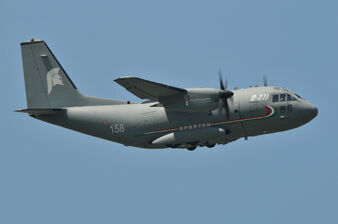 The Alenia C-27J Spartan is a medium-sized military transport aircraft. The C-27J is an advanced derivative of the company's G.222 (C-27A Spartan in US service), with the engines and systems of the Lockheed Martin C-130J Super Hercules. The aircraft was selected as the Joint Cargo Aircraft for the United States military.

In 1997, Alenia and Lockheed Martin formed Lockheed Martin Alenia Tactical Transport Systems (LMATTS) for the development of an advanced version of the G.222 with advanced avionics, a glass cockpit and new engines, the same Rolls-Royce AE 2100s that power the C-130J Super Hercules. The LMATTS joint venture was later dissolved when Lockheed Martin chose to offer the C-130J as a contender in the same U.S. Army and U.S. Air Force Joint Cargo Aircraft (JCA) competition in which the C-27J was competing.[1] Alenia Aeronautica then paired with L-3 Communications to form the Global Military Aircraft Systems (GMAS) joint venture to market the C-27J.[2] Boeing Integrated Defense Systems later joined Alenia and L-3 Communications as a GMAS team member.[3]

The C-27J had completed the U.S. Department of Defense's Early User Survey evaluations by November 2006, flying 26 hours and surpassing all the JCA program requirements. The GMAS team also announced that the C-27J will be assembled at a facility at Cecil Field, Duval County, Florida.[6] While the final selection of the JCA was expected to be announced in March 2007, the decision came on 13 June 2007, when the Pentagon selected the C-27J as its Joint Cargo Aircraft.[5] A contract worth US$2.04 billion was awarded to the L-3 Communications team for 78 C-27Js along with training and support on June 13, 2007.[7] On 22 June 2007, Raytheon formally protested the award of the JCA contract to the Alenia C-27J.[8] On 27 September 2007, the GAO announced that it had denied Raytheon’s protest, thereby allowing the Pentagon to go ahead with the C-27J procurement.[9] Prior to Raytheon's protest, the first C-27J aircraft were to begin delivery to the joint U.S. Army-Air Force test and training program in June 2008.[10] The first flight of a US C-27J occurred on 17 June 2008.[11]

The C-27J was being considered as a sole-source contract by the Government of Canada as a future replacement for its current search and rescue airfleet, the contract being worth approximately C$3 billion as of January 2007.[12]

Romania ordered seven C-27Js for delivery from 2008 to replace Antonov An-24 and An-26 aircraft, beating the EADS CASA C-295.[13] However, the order was blocked by the government in February 2007 upon a legal challenge filed by EADS.[14]. In June 2007, the order was confirmed again when the Romanian court rejected EADS' complaint.[15] The Romanian government officially signed a contract for the delivery of seven C-27Js on December 7, 2007.[16]

The C-27J is a probable contender for a Royal Australian Air Force requirement for light airlifer to replace its aging DHC-4 Caribou.[17]

US Air Force is shifting US$32 million from the Pentagon's 2008 budget to purchase a C-27J for its Special Operations Command. The AC-27J will be equipped using proven hardware and systems to reduce risk.[19][20][21]