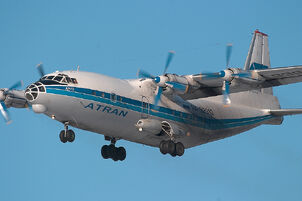 The Antonov An-12 (NATO reporting name: Cub) is a four-engined turboprop transport aircraft. It is the military version of the Antonov An-10.

The first prototype flew in March 1957. Over 900 had been built, in both military and civilian versions, before production finally ended in 1973. The An-12BP entered Soviet military service in 1959. In terms of configuration, size and capability, the aircraft is similar to the United States-built Lockheed C-130 Hercules. Military Soviet planes have a defensive tail gun turret.

In the 1960s, China purchased several An-12 aircraft from the Soviet Union, along with license to assemble the aircraft locally. However, due to the Sino-Soviet split, the Soviet Union withdrew its technical assistance. It wasn't until 1974, when the first Chinese-assembled An-12 had its maiden flight. The Xi'an Aircraft Company and Xi'an Aircraft Design Institute worked to reverse engineer the An-12 for local production. [1]

By 1981, the Chinese copy version of An-12, named Yun-8 (Y-8) entered serial production. Since then, the Y-8 has become one of China's most popular military and civilian transport/cargo aircraft, with many variants produced and exported. Although the An-12 is no longer made in Russia or Ukraine, the Chinese Y-8 continues to be upgraded and produced. The latest Y-8-F600 is a joint venture between Shaanxi Aircraft Company, Antonov Aeronautical Scientific-Technical Complex (ASTC), and Pratt & Whitney Canada. The Y-8-F600 has redesigned fuselage, western avionics, PW150B turboprop engine with an R-408 propeller system, and 2-man glass cockpit. [2]

Currently the An-12 is very popular with cargo operators, especially those in the CIS, Africa and the Indian subcontinent.

In the 2005 movie Lord of War, the main character Yuri Orlov, played by Nicolas Cage, commonly uses an Antonov An-12 to transport weapons, and is later said to have "a fleet" of such planes. Andrew Niccol, the director of Lord of War, stated that they actually used one of Viktor Bout's An-12 aircraft in the movie.[4]