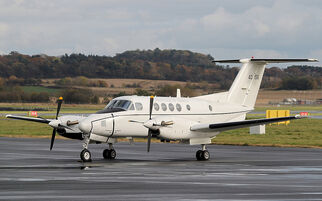 The C-12 Huron is the military designation for a series of twin-engine turboprop aircraft that are military versions of various versions of the Beechcraft Super King Air. C-12 variants are used by the United States Air Force, United States Army, and the United States Navy. These aircraft are used for various duties, including embassy support, medical evacuation, passenger and light cargo. Some aircraft are modified with surveillance systems for various missions, including the Cefly Lancer and the Guardrail programs.

The first C-12A models entered service with the Army in 1974 and was used as a liaison and general personnel transport. The aircraft was essentially an "off-the-shelf" Super King Air 200, powered by the type's standard Pratt & Whitney Canada PT6A-41 engines.[1]

The U.S. Navy followed suit in 1979, ordering a version of the Super King Air A200C (modified with a 52 inch by 52 inch cargo door from the Super King Air 200C), designating it the UC-12B, for logistics support between naval and marine corps air stations and other activities, both in CONUS and overseas. The cabin can readily accommodate cargo, passengers or both. It is also equipped to accept litter patients in medical evacuation missions. Through 1982, the Navy ordered 64 of these aircraft.[1]

The U.S. Army selected the C-12 platform for use as an intelligence-gathering aircraft under the Guardrail series of programs. The Guardrail program uses variants RC-12D, -12H, -12K, -12N, -12P, and -12Q variants. The aircraft's role is as an electronic snooper, listening in for enemy radio transmissions. The aircraft is flown by a flight crew of two, and the missions equipment is operated remotely from a ground control center. Guardrail is a Corps Level Airborne signals intelligence (SIGINT) collection/location system that integrates the Improved GUARDRAIL V (IGR V), Communication High Accuracy Airborne Location System (CHAALS), and the Advanced QUICKLOOK (AQL) systems into the same aircraft platform. Key features include integrated COMINT and ELINT reporting, enhanced signal classification and recognition, fast Direction Finding (DF), precision emitter location, and an advanced integrated aircraft cockpit.[2]

The RC-12D was operated during the 1980s by the 2nd Military Intelligence Battalion, 207th Military Intelligence Brigade (Eyes of the Jayhawk) located out of Echterdingen Kaserne, at the Stuttgart Airport. The 207th MI brigade deployed with VII Corps to Al Qaisumah Airport, in Saudi Arabia, in December of 1990 in support of Operations Desert Shield, Operation Desert Storm and Operation Desert Calm.[verification needed]

With the advances in technology and advent of tactical UAVs, the Army has announced that it is seeking a replacement for the Guardrail aircraft.[3]

To meet the needs of transporting larger groups, the Army purchased six C-12J aircraft, based on the Beechcraft 1900C commuter airliner. Of the military C-12J's one is used for GPS jamming tests at the 586th Flight Test Squadron, Holloman Air Force Base, New Mexico.[4] Another is based at the 517th Airlift Squadron, Elmendorf Air Force Base, Alaska.[5] Three were based at the 55th Airlift Flight, Osan Air Base, South Korea.[6] They have been relocated to the 459th Airlift Squadron, Yokota Air Base, Japan. The remaining two are used by U.S. Army Aviation.[7]

Although the UD- series 1900s were manufactured exclusively for military use, the United States military and other military and government organizations use 1900s from other series such as the UB-series 1900C photographed above, and 1900Ds which may be found elsewhere.[7]

C-12S
Army version based on the King Air 350, with seating for 8 to 15 passengers and quick cargo conversion capability.

Note: The U.S. military also operates other King Air versions under other designations, including the C-6 Ute and T-44 series. In addition, there are a number of Beechcraft 1900s operated by the military under civilian registrations, using their civilian model designations.

Orthographically projected diagram of the Beechcraft King Air B200.

Retrieved from "https://aircraft.fandom.com/wiki/Beechcraft_C-12_Huron?oldid=12736"
Community content is available under CC-BY-SA unless otherwise noted.