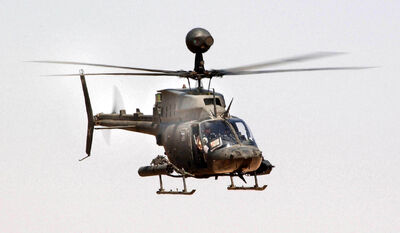 The OH-58 Kiowa is a multirole military helicopter made by Bell Helicopter. Based on the company's civilian 206 JetRanger, the Kiowa first flew on December 8th, 1962, and was introduced into service in May, 1969. While primarily used for observation, it can also be armed for direct fire support. The Kiowa was developed for the United States Army, and despite being over 40 years old, is still used by both it and many other militaries around the world.

The OH-58D, the most recent variant, is powered by a Rolls-Royce T703-AD-700A or 250-C30R/3 turboshaft engine, which gives it a top speed of 149 mph. It needs a crew of two and can carry five additional passengers. For combat, the Kiowa can be armed with AGM-114 Hellfire anti-tank missiles, Hydra 70 rockets, an M296 or M3P machine gun, and/or AIM-92 Stinger missiles.