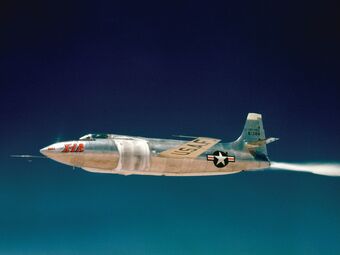 The Bell X-1 (the first aircraft to fly solely with the X for experimental designation) was designed to explore the dynamic characteristics of aircraft flying at or faster than the Speed of Sound.[1]

W33-038-ac-9183, which had been signed on March 16 1945. The three aircraft, which originally carried the XS (Experimental Supersonic) designation, would be used to explore the transonic speed envelope wherein an object transitions from subsonic to supersonic flight, with emphasis on the affects on stability and control experienced during supersonic flight.[1]