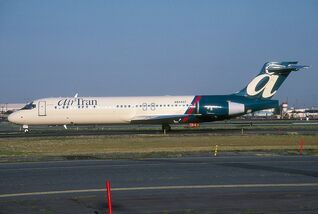 The Boeing 717 started life as the McDonnell Douglas MD-95, itself a development of the DC-9/MD-80 series. When Boeing purchased McDonnell Douglas, they continued the design under the new name.

Production ceased in May 2006 after 156 were produced.

As of June 2018, the Boeing 717 has been involved in five accidents and incidents with no hull losses or fatalities. These accidents and incidents included an on-ground collision while taxiing, an emergency landing where the nose landing gear did not extend, and an attempted hijacking.
This article is a stub. You can help the Aircraft Wiki by expanding it.

Retrieved from "https://aircraft.fandom.com/wiki/Boeing_717?oldid=17797"
Community content is available under CC-BY-SA unless otherwise noted.