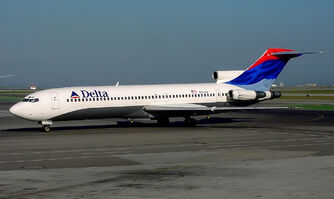 The 727's fuselage has an outer diameter that allows six-abreast seating (three per side) and a single central access walkway when coach-class (18 inch width) seats are installed.

The 727 design arose as a compromise between United Airlines, American Airlines, and Eastern Air Lines requirements over the configuration of a jet airliner to service smaller cities which often had shorter runways and correspondingly smaller passenger demand. United Airlines wanted a four-engined aircraft for its flights to high-altitude airports, especially its hub at Stapleton International Airport at Denver, Colorado. American, which was operating the four-engined Boeing 707 and 720, wanted a twin-engined aircraft for efficiency reasons. Eastern wanted a third engine for its overwater flights to the Caribbean, since at that time twin-engined commercial flights were limited by regulations to routes with 60-minute maximum flying time to an airport (see ETOPS/LROPS). Eventually, the three airlines agreed on a trijet, and thus the 727 was born. The third JT8D engine, which is located at the very rear of the fuselage (called engine 2), is supplied with air from an inlet at the front of the vertical fin through an S-shaped duct to the engine's inlet.[2] The 727 featured high-lift devices on its wing, thus being one of the first jets able to operate from relatively short runways. Later models of the 727 were stretched to accommodate more passengers and they ended up replacing earlier jet airliners, such as the Boeing 707 and Douglas DC-8, on domestic routes.

The 727 proved to be a reliable and versatile airliner so that came to form the core of many start-up airlines' fleets, it is sometimes described as the "DC-3 of the Jet Age".[verification needed] The 727 was successful with airlines worldwide partly because of its capability to use smaller runways while still flying medium range routes. This effectively allowed airlines to attract passengers from cities with large populations but smaller airports to worldwide tourist destinations. One of the features that gave the 727 its ability to land on shorter runways was its unique wing design. Due to the absence of wing-mounted engines, leading-edge lift enhancement equipment (Krueger, or hinged, flaps on the inner portion of the leading edge, and extendable leading-edge slats on the remainder of the leading edge), and trailing-edge lift enhancement equipment (triple-slotted[3], aft-moving flaps) could be used on the entire wing. The combination of these high-lift devices produced a maximum wing lift coefficient of 3.6 (based on the flap-retracted wing area). Thus the 727 could fly with great stability at very low speeds compared to other early jets. The 727 also had nosegear brakes fitted in the beginning to further decrease braking distance upon landing. However, these were soon removed from service, as they provided little useful reduction in braking distances, while adding weight and increasing maintenance requirements.

The 727 was designed to be used at smaller, regional airports, so independence from ground facilities was an important requirement. This gave rise to one of the 727's most distinctive features: the built-in airstair that opens from the rear underbelly of the fuselage. D. B. Cooper, the hijacker, parachuted from the back of a 727 as it was flying over the Pacific Northwest. Boeing subsequently modified the design with the Cooper vane so that the airstair could not be lowered in flight. Another innovation was the inclusion of an APU (auxiliary power unit), which allowed electrical and air-conditioning systems to run independent of a ground-based power supply, without having to start one of the main engines. The 727 can also back itself up, thus not requiring the push tractor needed for most other jet airliners to leave an airport gate. The 727 is equipped with a retractable tail skid which is designed to protect the aircraft in the event of an over-rotation on takeoff.

The 727 is a stage II aircraft, making it one of the world's loudest commercial jetliners (the US Noise Control Act of 1972, 42USC 4901-4918, mandated the gradual introduction of quieter stages of aircraft, with the first introduction to be called Stage 3 airplanes. Aircraft which did not meet the ground-perceived noise levels specified for Stage 3 would be called Stage 2). The 727's JT8D jet engines use older low-bypass turbofan technology while Stage 3 aircraft utilize the more efficient and quieter high-bypass turbofan design. When the Stage 3 requirement was being proposed, Boeing engineers analyzed the possibility of incorporating quieter engines on the 727. They determined that the JT8D-200 engine could be used on the two side-mounted pylons, but the structural work required to fit the larger-diameter engine (49.2 inch fan diameter in the JT8D-200 vs. 39.9 inches in the JT8D-7) into the fuselage structure at the engine 2 location would be too great to be justifiable. Since the quieter engine could not be used in all three sites, the 727 could not be made into a Stage 3 aircraft.[verification needed]

At the turn of the 21st century, the 727 was still in service with a few airline fleets. However, because in the meantime the U.S. FAA and the ICAO had changed their requirements for overwater operations, most major airlines had already begun to switch to twinjets, aircraft with only two engines, which are more fuel-efficient and quieter than the three-engined 727. Also, the 727 was one of the last airliners in service to have a three-person flight crew, including a flight engineer, a crew member whose job is performed by computerized systems on newer planes.

If a 727 is used in commercial service at present, it must be retrofitted with hush kits to reduce engine noise to Stage 3 level. One such hushkit is offered by Fedex,[4] and this kit has been purchased by over 50 customers.[5] After market winglets have been installed on many 727s as a means of noise reduction as part of so called "Quiet Wing" Kits and for added fuel economy. Kelowna Flightcraft's maintenance division in Canada has installed winglets on Donald Trump's private 727-100. He owns one example of the aircraft.

In addition to domestic flights of medium range, the 727 was popular with international passenger airlines. The range of flights it could cover (and the additional safety added by the third engine) meant that the 727 proved efficient for short to medium range international flights in areas around the world. Prior to its introduction, four-engined jets or propeller-driven airliners were required for transoceanic service.

The 727 also proved popular with cargo airlines and charter airlines. FedEx introduced 727s in 1978. 727s were the backbone of its fleet until recently, but FedEx is now phasing them out in favor of the Boeing 757. Many cargo airlines worldwide now employ the 727 as a workhorse, since as it is being phased out of U.S. domestic service due to noise regulations, it becomes available to overseas users in areas where such noise regulations have not yet been instituted. Charter airlines Sun Country, Champion Air, and Ryan International Airlines were all started with 727 aircraft.

Other companies use the 727 as a way to transport passengers to their resorts or cruise ships. Such was the example of Carnival Cruise Lines, which used both the 727 and 737 to fly both regular flights and flights to transport their passengers to cities that harbored their ships. Carnival used the jets on its airline division, Carnival Air Lines.

Faced with higher fuel costs (although all major United States airlines phased them out immediately prior to the oil price increases since 2003), lower passenger volumes due to the post-9/11 economic climate, increasing restrictions on airport noise, and the extra expenses of maintaining older planes and paying flight engineers' salaries, most major airlines have phased 727s out of their fleets. Delta Air Lines, the last major U.S. carrier to do so, retired its last 727 in March,2003. However, the 727 is still flying for smaller start-up airlines, cargo airlines, and charter airlines, and it is also sometimes used as a private means of transportation. The official replacement for the 727 in Boeing's lineup was the Boeing 757. However, the smallest 757 variant, the 757-200, is significantly larger than the 727-200, so many airlines replaced their 727s with either the 737-800 or EADS' Airbus A320, both of which are closer in size to the 727-200.

QC stands for Quick Change. This is similar to the Convertible version with a roller-bearing floor for palletised galley and seating and/or cargo to allow much faster changeover time (30 minutes).

The dorsal intake of the number 2 engine was also redesigned to be round in shape, as opposed to oval as it was on the 100 series.

Speed increased by 50 mi/h (km/h {{{4}}}), due to replacement of the two side engines with the JT8D-217, which are also found on many MD-80s, and addition of hush kits to the center engine. These aftermarket modifications were performed by companies independent of Boeing, such as Valsan and Dee Howard.

Zero-Gravity Corporation uses a modified Boeing 727 to give paying customers a brief experience of weightlessness, similar to NASA's Vomit Comet that is used to train astronauts.

The 727 carries the distinction of being one of the two planes used by all six US legacy carriers, the other being the Boeing 757.

Retrieved from "https://aircraft.fandom.com/wiki/Boeing_727?oldid=17524"
Community content is available under CC-BY-SA unless otherwise noted.