The Boeing 757 is a short to medium range narrow-

body commercial passenger aircraft manufactured by Boeing Commercial Airplanes. It was launched by Eastern Air Lines and British Airways to replace the Boeing 727 and entered service in 1983. Production of the 757 ended on October 28, 2004 after 1,050 had been built.[1] The final aircraft was delivered to Shanghai Airlines on November 28, 2005. As of July 2007, a total of 1,019 Boeing 757 aircraft were in airline service.[2]It is the well-known aircraft which Bruce Dickinson flew in the Iron Maiden's last world tours.

The 757 (designated "7N7" during initial development)[3] was designed by Boeing to replace the Boeing 727 and complement the Boeing 767 on thin routes. Boeing originally offered the airlines a stretched, re-engined 727-200, known as the 727-300, but this never received enough interest from the airlines to proceed. Early 7N7 and 757 concepts featured a "T-tail" with under-wing engines, but a conventional tail was ultimately adopted. The 757 retains the same upper-fuselage diameter as the previous Boeing 707, 727, and 737. The first Boeing 757 was delivered to Eastern Air Lines on 22 December 1982.

The 757 was the first Boeing airliner launched with engines produced outside the United States, with early customers selecting the Rolls-Royce RB211. Pratt & Whitney soon offered the PW2000, launched by Delta Air Lines. General Electric offered an engine option early in the program, the CF6-32, but eventually abandoned the engine due to insufficient demand.

The 757 is used on heavy domestic routes as well as long routes between North America and Europe. Like the 727 it replaced, the 757 was designed for hot and high climates, such as Mexico City. For purposes of air traffic control spacing, the FAA requires greater separation behind a 757 than other large category aircraft because of their tendency to produce strong wake turbulence.[4][5]

The 757 maintains competitive economics with newer short haul aircraft like the Boeing 737 and Airbus A320 product lines, following the trend of larger aircraft having lower seat/mile cost. However, changing market conditions do not necessarily favor larger units of capacity. Should passenger loads fall, the smaller 737 and A320 reduce the airlines' exposure to financial risk. For those airlines in need of large capacity, the A321 and 737-900ER have lower trip cost, albeit with slightly fewer seats and less range. These airplanes fulfill the requirements of 90% of the routes served by the 757, and provide an alternative for airlines already operating 737 and A320 fleets.

While the program was a resounding financial success, sales dwindled during the late 1990s, eventually forcing Boeing to cease production. The 1,050th and last 757, destined for Shanghai Airlines, rolled off the production line at Renton on October 28, 2004[1] and was delivered to the customer in April, 2005 after several months of storage.[6] In the short term, the 757-200 has been succeeded by the 737-900ER. Boeing believes the 737-900ER will be a suitable 757-200 replacement for most passenger applications, though the 737-900ER does not have the hot and high capacity of the 757 family. In the long term, the 757 is to be succeeded by the Y1. The 757-300 is being succeeded by the Boeing 787 widebody. Airbus has not yet announced future models in the 757 category, but currently the A321 is offered.

The majority of 757s are in service with U.S. carriers (64% of aircraft in service at July 2007), Delta Air Lines and American Airlines being the first and second largest customers of the type, respectively. Prior to July 2007, American Airlines was the largest operator, operating a total of 141 757s. American Airlines has retired their 757 fleet that was inherited via American's buyout of TWA, due to the fact that they use Pratt & Whitney engines rather than Rolls-Royce like most of American's 757s. Seventeen of these 757s are being leased to Delta Air Lines via ILFC and Pegasus Aviation. United Airlines, Continental Airlines, US Airways, America West Airlines (now a part of the US Airways Group), and Northwest Airlines also operate large 757 fleets. The 757 is the only type of aircraft presently used by all six U.S. "legacy" airlines.

The 757 is also used for holiday/charter airlines in the UK. Thomas Cook Airlines, First Choice Airways, Monarch Airlines, Titan Airways, XL Airways, Astraeus and Thomsonfly operate over 70 aircraft. British Airways profitably runs the aircraft on short routes such as London to Manchester (150 miles) and London to Edinburgh and Glasgow (350 miles), while other airlines have used the 757 for intercontinental and transatlantic routes.

Skyrocketing jet fuel prices have put pressure on airlines to improve the average fuel efficiency of their fleets. American Airlines's 757-200 aircraft each burned $4,153 of jet fuel to fly from St. Louis to San Francisco in 2004; in 2008, the same quantity of fuel cost $14,676 [7] One way to improve the efficiency of an airplane is to reduce lift-induced drag by installing winglets. Although production has ceased, blended winglets are available from Aviation Partners Inc. as a retrofit to increase fuel efficiency and range.[8]</nowiki> Aviation Partners claims improvements of 5% on fuel efficiency and 200 nautical miles (370 km) on range. Winglets on the 757 have only been approved for the 757-200 series as 757-200WL (757-200WingLets), and are pending approval for the 757-300 series.[verification needed]

The 757-200 is the definitive version and forms the majority of 757s sold. It shares its fuselage cross section with the smaller 727 and 737. Boeing positioned the plane above the 737 and as an eventual replacement for the 727. At first it was meant to be a little shorter in length. In the end it was positioned not only above the 737, but also the 727.

This variant can carry 228 passengers in a single class. However, with a seat pitch of 29" it can carry a maximum of 234 passengers. This configuration is also the FAA limit for the aircraft due to emergency exit rules.

The 757-200 was available in two different door configurations. One version used three standard doors per side with an additional, smaller door aft of the wing on each side for emergency evacuations. All eight door locations are equipped with inflatable evacuation slides. The alternate version is equipped with three standard doors per side (two towards the front and one at the aft of the cabin) with two "plug-type" over-wing exits per side replacing the smaller door aft of the wing.

The 757-200 introduced an interior that became standard on all narrowbody Boeing aircraft (including the Boeing 737 Classics) until the release of the Next Generation 737, which introduced an updated interior borrowing elements from the Boeing 777-style interior.

The 757PF has no passenger windows or doors and no interior amenities. A large main-deck cargo door is installed in the forward area of the fuselage on the left-hand side. The flight crew boards the aircraft through a single entry door installed immediately aft of the flight deck on the left side of the aircraft.

The interior of the main-deck fuselage has a smooth fiberglass lining. A fixed rigid barrier installed in the front end of the main deck serves as a restraint wall between the cargo and the flight deck. A sliding door in the barrier permits access from the flight deck to the cargo area.

Many former passenger 757-200s have been converted into 757-200 SF (Special Freighters), mainly for DHL. This conversion involves adding a cargo door on the left forward fuselage (identical to the 757-200PF), and removing all passenger amenities. All but the two forward cabin doors are sealed shut, and cabin windows are deleted. In September 2006, FedEx Express launched a US $2.6 billion fleet renewal initiative based on retiring its Boeing 727 aircraft and acquiring second-hand Boeing 757s. Converted 757s are expected to enter service between 2008 and 2016.[9]

This model was launched for Royal Nepal Airlines. It is a convertible version where the seats can be removed in order to place cargo on the main deck. Nepal needed a plane that could operate from high altitude airfields and, having low passenger traffic, they also were in need of a plane that could be converted to a freighter. Boeing saw this as an opportunity to showcase its 757. The 737 and 747 convertibles had proved popular and saw a market potential for the 757-200M. However only one example was ever ordered, delivered in 1988 to Royal Nepal whom still operate it under the registration 9N-ACB.

The Royal New Zealand Air Force also operates 757-200 combi aircraft; however these are not designated as 757-200M; and were converted from ex-Transavia airframes.

Other versions such as a 757-200ER were proposed, but never launched. However improvements such as winglets are offered for those upgrading their fleets. The winglet equipped 757-200s are also given other improvements, such as more comfortable seats for longer international journeys.[verification needed] These enhanced 757-200s are sometimes referred to as 757-200ER aircraft. All 757-200s in regular transatlantic service are equipped with winglets.[verification needed]

The 757-300 is a stretched version of the -200, that first flew in August 1998. The 757-300 has the capacity to seat 295 passengers in an economy-only cabin, though the highest configuration in airline service is 280 seats, as operated by Thomas Cook Airlines. The fuel capacity was not increased and therefore the range was reduced to 3,395 nm (6,287 km). 55 were ordered and delivered. This model has 8 standard doors, with 4 over-the-wing exit doors, 2 on either side. This model also features the interior of the Next Generation 737, which blends aspects of the 757-200 interior with the Boeing 777-style interior. It has proved popular with charter airlines for its efficiency and dense capacity.

For Boeing to have increased the fuel capacity, it had to strengthen the undercarriage and other areas to increase the MTOW. The 757-300 series was available for purchase with two engine options: either 43,100 lbf (191.7 kN) Rolls Royce RB-211-535E4-B turbofans, or 43,850 lbf (195.1 kN) Pratt & Whitney PW-2043 turbofans. In the end, only Northwest Airlines ordered the 757-300 with the Pratt & Whitney engines, making them unique among the series. Boeing decided against further investment in the 757 family and focused efforts on the 737 Next Generation series (specifically the 737-900ER which Boeing believes will be a suitable 757-200 replacement for most passenger applications) and the Boeing 787, which Boeing believes, in smaller versions, will substitute for larger versions of the 757 family.

The 757 has also found itself in private and government service. The United States Air Force has fitted four 757-200s for VIP transport duties (C-32A). These are painted in the standard blue and white paint scheme used by the USAF for its VIP transport aircraft. These aircraft are often used to transport the Vice President of the United States under the callsign "Air Force Two". The USAF also operates two 757-200 aircraft (C-32B) for use by the U.S. State Department Foreign Emergency Support Team. These aircraft are painted solid white with only a small American flag and the USAF serial number visible on the fuselage.

As of September 2007, there have been eight hull-loss accidents with a total of 700 fatalities (includes 125 fatalities on ground due to terrorist hijacking and subsequent crash in the September 11, 2001 attacks).

There is a large market for used 757 aircraft as they are needed to replace even older 727 aircraft.[verification needed] 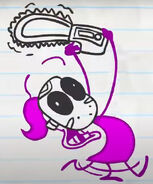 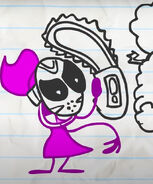 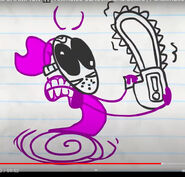 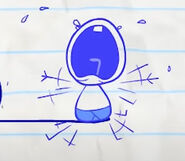