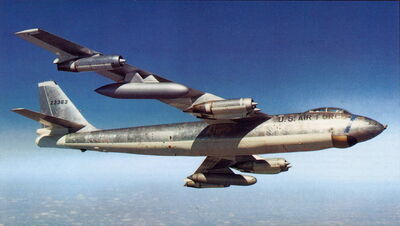 The Boeing B-47 Stratojet was a six-engined strategic bomber designed in the late 1940s by the Boeing Aircraft Company.

The idea for the B-47 began with a 1943 requirement set by the the United States Army Air Force for a jet-powered bomber and reconnaissance aircraft. Designs were submitted by Boeing, Martin, Convair, and North American, and all four were awarded contracts in 1944. Boeing's final design, the Model 450, took in to consideration research done by Germany during World War II on the benefits of swept-back wings, and used six TG-180 turbojet engines mounted under the wings. The USAAF ordered two prototypes of this model in

The B-47 never saw active combat, at least in its bomber role. It suffered from unreliable avionics, was difficult to take off and land, and experienced a number of stress fractures in its wing mounts that led to crashes. However, the Stratojet did see service in a number of other areas, particularly in reconnaissance. During the Cold War, RB-47s flew many surveillance missions over the USSR, and were even fired upon on occasion. Several were shot down, but their superior speed usually allowed them to escape the Soviet interceptors. The B-47 was completely retired by 1977, replaced by the B-52 Stratofortress and B-58 Hustler in the bomber role and by the Boeing RC-135 in the reconnaissance role.