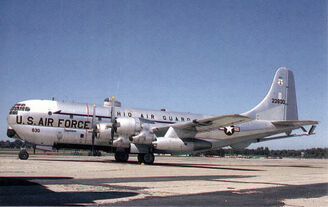 The Boeing C-97 Stratofreighter was a long range heavy military cargo aircraft based on the B-29 Superfortress bomber. Design work began in 1942, with the prototype's first flight in 1944, and the production aircraft entering service in 1947. Between 1947 and 1958, 888 C-97s in several variants were built - 816 of them KC-97 tankers. C-97s served in the Berlin Airlift, the Korean War, and the Vietnam War. Some aircraft served as flying command posts for the Strategic Air Command, while others were modified for use in Aerospace Rescue and Recovery Squadrons (ARRS).

The Boeing C-97 Stratofreighter was developed towards the end of World War II by fitting an enlarged upper fuselage onto a lower fuselage and wings which were essentially the same as the B-50 Superfortress with the tail, wing, and engine layout being nearly identical. It was built before the death of Boeing president, Philip G. Johnson.

The prototype XC-97 was powered by the 2,200 hp (1,640 kW) Wright R-3350 engine, and was fitted with a built-in ramp and a hoist to help in the loading and unloading of supplies and personnel through the large clamshell-type doors in the belly. On January 9, 1945 the first prototype, piloted by Major Curtin L. Reinhardt, flew from Seattle to Washington, DC in 6 hours 4 minutes, an average speed of 383 mph (616 km/h) with 20,000 pounds (lb) of cargo, which was for its time rather impressive for such a large aircraft. Production models featured the 3500 hp (2,610 kW) Pratt & Whitney Wasp Major engine, the same engine as the B-50.

The C-97 had a useful payload of 35,000 lb (16 t) and could carry two normal trucks or light tanks. The C-97 was also the first mass produced air transport to feature cabin pressurization, which made long range missions somewhat more comfortable for the crew and passengers.

C-97s evacuated casualties during the Korean War. C-97s also participated in the airlift of relief materials to Uli airstrip (Biafra) during the Nigerian Civil War. Flying under the cover of darkness and at tree-level to evade radar, at least two C-97s were lost.[1] The USAF Strategic Air Command operated C-97 Stratofreighters from 1949 through 1978. Early in its service life, it served as an airborne alternative SAC command post. While only 60 C-97 transports were built, 812 were built as the KC-97 Stratotanker variant for inflight refueling. The civilian derivative of the C-97 was the Boeing 377 Stratocruiser, a very luxurious transoceanic air liner which featured a lower deck lounge and could be fitted with sleeper cabins.

One YC-97A was used in the Berlin Airlift during April 1949 operating for the 1st Strategic Support Squadron. It suffered a landing gear accident and by the time it was repaired, the Soviet Blockade was lifted.

One Israeli C-97 was downed by Egyptian SAM-2 missiles in September 1971 during a military clash on the Suez Canal.Template:Citation needed

Two C-97s are still airworthy at the present day, one operated as a privately-owned warbird, the other operated as a fire bomber in the United States.

The following USAF wing organizations flew the various KC-97 models at some time during their existence:[2]