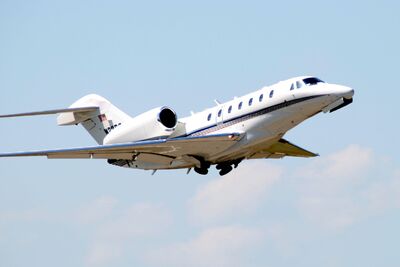 The Citation X is a twin-engine business jet manufactured by the Cessna Aircraft Company. A member of the Citation family of aircraft, it is the fastest business aircraft in the world, with a maximum speed of over 700 mph. 330 have been built so far.

The Citation X was first announced in October, 1990, as an improvement over the aging Citation 650 series. The aircraft first flew on December 21st, 1993, and entered service in 1996 after a number of issues with it were fixed, including engine flame outs and directional stability challenges. The Citation X  went on to set a record for the civilian jet aircraft. It is still in production today, with an upgraded version, the New Citation X, currently in development.

Retrieved from "https://aircraft.fandom.com/wiki/Cessna_Citation_X?oldid=11692"
Community content is available under CC-BY-SA unless otherwise noted.