Start a Wiki
The J-XX is a Chinese fifth generation stealth fighter. It is considered be a counterpart to the U.S. Air Force Lockheed Martin F-22 Raptor and the Russian Sukhoi PAK FA. It features stealth, and eventual supercruise capability and is planned to have an AESA Radar. Its maiden flight took place in 2011.

The J-20 shows a delta-wing canard design. Although some say otherwise, the J-20 bears certain similarities to the F-22 and MiG-1.44. The cockpit of the J-20 is very similar to that of the Raptor, while the general design of the plane looks similar to the MiG-1.44. Like the F-35 Lightning II the J-20 has a Diverterless Supersonic Inlet. Judging by the aircraft's large frame and design, it can be assumed that the J-20 may be used as a long range strike fighter and not as a pure air superiority design. 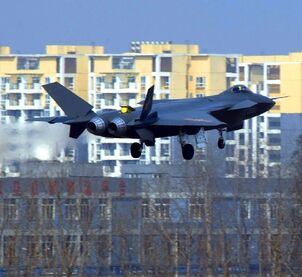 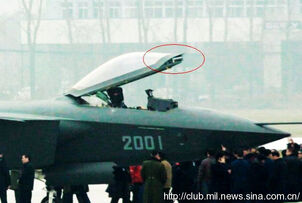 Artist's impression of the aircraft
Add a photo to this gallery
Retrieved from "https://aircraft.fandom.com/wiki/Chengdu_J-20?oldid=16585"
Community content is available under CC-BY-SA unless otherwise noted.