The Convair F-106 Delta Dart was an extreme redesign of the F-102 Delta Dagger. While it looked similar on the outside, the inside was redesigned immensely. It retired from USAF service in 1988, while a handful were used by NASA until 1998.

The first trials aircraft began flying on 26 December 1956, the type entering service with USAF Air Defence Command in July 1959. When production of the Delta Dart was completed in July 1961, 277 F106As had been built, together with 63 fully operational two seat F-106B combat training aircraft. A total of 13 squadrons operated the type until their withdrawal from USAF service in August 1988, with final operations being flown by units of the Air National Guard (ANG).[2]

Differences from the F-102 Delta Dagger[]

There are a few ways to tell the difference between the two. One is the vertical tail: the Dagger's tail is in the shape of a right-triangle, while the Dart's stretches back slightly, making it larger. Second, the air intakes are different: the Dart's are much farther back behind the cockpit, while the Dagger's are below and slightly in front of the cockpit.

The Mercury Seven, in front of a Delta Dart 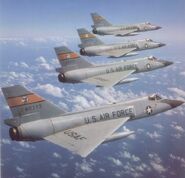 Quartet of F-106s in formation 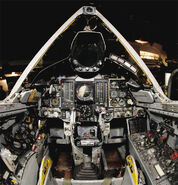 Cockpit view of a Dart

Joe Rogers in front of a Dart