The Dassault Mirage F1 is an Interceptor and Multirole Fighter aircraft designed and manufactured by Dassault Aviation. Many different variants were made of it and it was exported into many countries.

The Mirage F1 was based on the Dassault Mirage III to be a smaller and cheaper alternative to the failed Dassault Mirage F2. The Private Venture prototype was first flown on 23rd December 1966 By Rene Bigand, reaching Mach 2 on it's forth flight on January 7th 1967. The prototype crashed on 18th May 1967, during practice for a display routine.[2] so that flight testing was restarted on March 1969. The first operational aircraft were bought by the French Air Force in 1973. The Mirage F1 was exported to Greece, Morocco, Spain, Kuwait and Jordan. With 110 units the Iraq uses most of them, after the French Air Force, they were also successfully exported to South Africa. 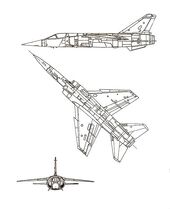