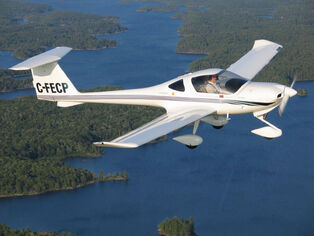 The DA20 was introduced in 1992 and was the first Diamond aircraft available for purchase in North America. The first example was built in Canada in 1994, and units cost around $185,000 each. While mostly used as civil aircraft, several American institutions use them as trainers. Doss Aviation owns several DA20s that are contracted for training by the United States Air Force. The aircraft was later developed into the four-seater DA40.