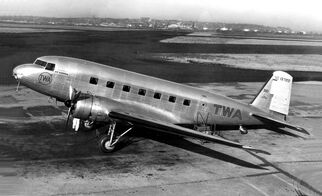 The Douglas DC-2 was a 14 seat, twin-propeller airliner

produced by the Douglas Aircraft Corporation starting in 1934. It competed with the Boeing 247. In 1935 Douglas produced a larger version called the DC-3, which became one of the most successful airplanes in history.

In the early 1930s, fears about the safety of wooden aircraft structures (responsible for the crash of a Fokker Trimotor) compelled the American aviation industry to develop all-metal types. With United Airlines having a monopoly on the Boeing 247, rival Transcontinental and Western Air issued a specification for an all-metal trimotor.

The response of the Douglas Aircraft Company was more radical. When it flew on July 1, 1933, the prototype DC-1 had a highly robust tapered wing, a retractable undercarriage, and only two 690 hp (515 kW) Wright radial engines driving variable-pitch propellers. It seated 12 passengers.

TWA accepted the basic design and ordered 20, with more powerful engines and seating for 14 passengers, as DC-2s. The design impressed a number of American and European airlines and further orders followed. Those for European customers KLM, LOT, Swissair, CLS and LAPE were assembled by Fokker in the Netherlands. 156 DC-2s were built.

Although overshadowed by its ubiquitous successor, it was the DC-2 which first showed that passenger air travel could be comfortable, safe and reliable. As a token of this, KLM entered their first DC-2 PH-AJU Uiver (Stork) in the October 1934 MacRobertson Air Race between London and Melbourne. Out of the 20 entrants, it finished second behind only the purpose built de Havilland DH.88 racer Grosvenor House. During the total journey time of 90 h 13 min, it was in the air for 81 h 10 min, and won the handicap section of the race. ( The DH.88 finished first in the handicap section, but the crew was by regulations allowed to claim only one victory.)

There are currently no DC-2s in commercial service. However, at least 4 aircraft made it into the 21st century: