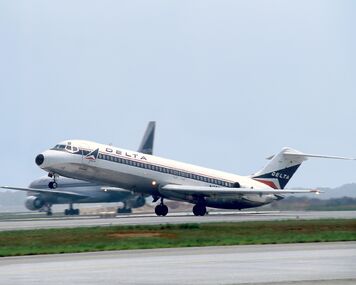 The McDonnell Douglas DC-9 (initially known as the Douglas DC-9) is a twin-engine, single-aisle jet airliner. It was first manufactured in 1965 with its first flight later that year. The DC-9 was designed for frequent, short flights. The final DC-9 was delivered in October 1982.

Douglas launched the DC-9 development project in April 1963, intending the DC-9 as a short-range companion to their larger four engined DC-8.[1] Unlike the competing but slightly larger Boeing 727, which used as many 707 components as possible, the DC-9 was an all-new design. The DC-9 features two rear fuselage-mounted Pratt & Whitney JT8D turbofan engines, relatively small, efficient wings, and a T-tail.[1] In most configurations, DC-9 aircraft have 5-abreast seating in the main cabin. The airplane seats 80 to 135 passengers depending on version and seating arrangement. (Note DC stands for Douglas Commercial.)

The first DC-9, a production ship, flew in February 1965. The second DC-9 flew a few weeks later and entered service with Delta Air Lines in late 1965.[1] The initial Series 10 would be followed by subsequent growth variants. The final DC-9 series was the -50, which first flew in 1974. The DC-9 was a commercial success with 976 built when the production ended in 1982.[1]

The DC-9 is one of the longest lasting aircraft in operation. Its reputation for reliability and efficiency drove strong sales of its successors well into the 2000s. The DC-9 family is one of the most successful jet airliners with a total of over 2,400 units produced; it ranks third behind the second place Airbus A320 family with over 3,000 produced, and the first place Boeing 737 with over 5,000 produced.

The DC-9 was followed by the introduction of the MD-80 series in 1980. The MD-80 series was originally called DC-9-80 series. It was a lengthened DC-9-50 with a higher maximum take-off weight (MTOW), a larger wing, new main landing gear, and higher fuel capacity. The MD-80 series features Pratt & Whitney JT8D engines with higher thrust ratings than those on the DC-9.

The MD-80 series was further developed into the McDonnell Douglas MD-90 in the early 1990s. It has yet another fuselage stretch, a glass cockpit (first introduced on the MD-88) and completely new high-bypass International Aero V2500 engines. In comparison to the very successful MD-80, relatively few MD-90 examples were built.

The final variant of the DC-9 family was the MD-95, which was renamed the Boeing 717-200 after McDonnell Douglas's merger with Boeing in 1997 and before aircraft deliveries began. The fuselage length and wing are highly similar to those found on DC-9-30 aircraft, but much use was made of lighter, modern materials. Power is supplied by two BMW/Rolls-Royce BR715 high bypass turbofan engines.

In 2008, DC-9s and derivative models (except MD-90 and 717) are considered gas guzzlers. Studies aimed at improving DC-9 fuel efficiency, by means of retrofitted wingtip extensions of various types, have not succeeded in demonstrating significant benefits. With the existing fleets shrinking, modifications do not appear to be likely to occur, especially since the wing design makes retrofitting difficult.[2] Thus, DC-9s are likely to be further replaced in service by new Boeing 737, Airbus A320, Embraer E-Jets aircraft, or the new, emerging Bombardier C-series airliner.[3] However, it is probable that a modest number of DC-9s will continue to productively fly for many years to come.

DC-9-20: This was designed to satisfy a Scandinavian Airlines request for improved short field performance by using the more powerful engines and improved wings of the -30 combined with the shorter fuselage used in the -10. Ten Series 20 aircraft were produced, all of them Model -21.[4] As of April 2008, one DC-9-21 operated as a skydiving jump platform at Perris Valley Airport in Perris, CA (USA). With the steps on the ventral stairs removed, it is the only airline transport class jet certified by the FAA for skydiving operations.[5]

DC-9-50: The -50 was the largest DC-9 to fly. It features an 8 ft 2 in (2.5 m) fuselage stretch and seats up to 139 passengers. It started revenue service in August 1975 with Eastern Airlines and included a number of detail improvements, a new cabin interior, and more powerful JT8D-15 or -17 engines in the (71-73 kN) class. McDonnell Douglas delivered 96, all as Model -51. Some visual cues to distinguish this version from other DC-9 variants include side strakes (fins) below the side cockpit windows and thrust reversers rotated about 22 degrees.

C-9: Several -30 (with side cargo door) series were purchased by the US armed forces. The C-9A Nightingale medevac configuration was for the U.S Air Force. The C-9B Skytrain II was for the U.S Navy and Marines, used for fleet logistics support moving both personnel and light cargo. The VC-9C is a VIP transport version for the US Air Force.

Versions of the DC-9 are also used by the Kuwait Air Force and Italian Air Force.

Northwest Airlines operates a fleet of DC-9 aircraft, most of which are over 30 years old. With severe increases in fuel prices in the summer of 2008, Northwest Airlines finally began retiring its DC-9s, switching to Airbus A319s that are 27% more fuel efficient.[6][7]

Retrieved from "https://aircraft.fandom.com/wiki/Douglas_DC-9?oldid=16288"
Community content is available under CC-BY-SA unless otherwise noted.