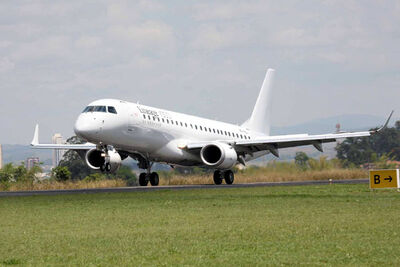 The Embraer Lineage 1000 is an "ultra-large" business jet developed from the Embraer 190 airliner. It is one of the largest business jets available, and costs over $49 million per unit.

The Lineage 1000 was developed from Embraer's successful 190 regional airliner, and was announced in May 2006 at the European Business Aviation Convention & Exhibition in Switzerland.[1] It has additional fuel tanks in its lower cargo hold which boost its range considerably, and it has five separate interior sections that can contain a variety of rooms, such as bedrooms or a kitchen. The Lineage first flew on 26 October 2007, and received certification from its native country of Brazil and from Europe in late 2008. The FAA certified it shortly thereafter, in January 2009. As of June 2013, 13 have been produced, most of which are owned by Middle Eastern millionaires and luxury charter airlines. However, a few are operated in Europe, India, and Mexico.

Retrieved from "https://aircraft.fandom.com/wiki/Embraer_Lineage_1000?oldid=11691"
Community content is available under CC-BY-SA unless otherwise noted.