Start a Wiki
The F-18 HARV (High Alpha Research Vehicle), is an F-18 variant modified to invest controlled flight at high angles of Attack. To do that it is equipped with a Thrust Vector system (TVC), advanced flight controls, and actuated forebody strakes. The program was started in April 1987 and lasted until September 1996. 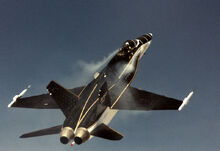 The F-18 HARV maneuvering at a high Angle of Attack 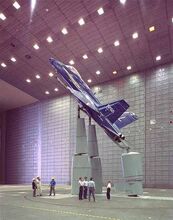 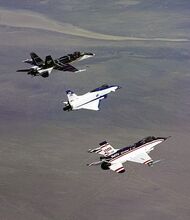 Retrieved from "https://aircraft.fandom.com/wiki/F-18_High_Alpha_Research_Vehicle?oldid=10721"
Community content is available under CC-BY-SA unless otherwise noted.