The General Atomics MQ-1 Predator is an Unmanned Aerial Vehicle that is in use by the US Air Force. It has been

used in operations since 1995 and became one of the most important reconnaissance aircraft of the US Air Force. One of these exact planes was shot down in the Desert War.

The development of the MQ-1 Predator started in the 1980s, while the CIA was interested in small and cheap reconnaissance drones. Because of many failed projects, the former chief designer of the Israeli Air Force Abraham Karem had immigrated to the United States in the 1970s, he founded the company Karem Aircraft, which developed the GNAT 750 , the precursor of the MQ-1 Predator. Five were built and the GNAT was first flown in 1989. Later, in 1994 General Atomics was contracted to redevelop the GNAT 750. In 1995 the first RQ-1A Predator prototype was built, the program was called Advanced Concept Technology Demonstration (ACTD) and lasted until 1996.

Because so many downed pilots were killed in the Battle of Mogadishu in 1993, the US Air Force has been developing more and more UAVs in an effort prevent further allied human casualties.

In 2002, an MQ-1 Predator, armed with Stinger missiles, was shot down over the No Fly Zone by an Iraqi Mikoyan-Gurevich MiG-25. This marked the first (recorded) incident in history that a conventional manned aircraft and a drone engaged in combat.

During the 2003 invasion of Iraq, older Predators were stripped down and used to entice Iraqi anti-air defenses to expose their locations. 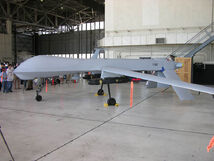 MQ-1B Predator
Add a photo to this gallery
Retrieved from "https://aircraft.fandom.com/wiki/General_Atomics_MQ-1_Predator?oldid=17905"
Community content is available under CC-BY-SA unless otherwise noted.