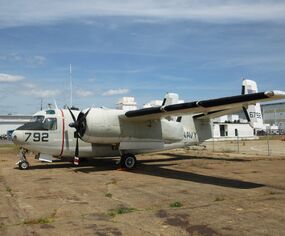 The C-1 Trader was a carrier-onboard-delivery (COD) variant of the S-2 Tracker. It was replaced by a similar version of the E-2 Hawkeye, the C-2 Greyhound.

The C-1 Trader grew out of a need by the United States Navy for a new anti submarine airplane. In response to this Grumman began development on a prototype twin-engine, high-wing aircraft which it designated the G-89.

In 1952 the United States Navy typed this aircraft the XS2F-1 and flew it for the first time on December 4th of that year. During the rest of the 1950s 3 major variants emerged, the C-1 Trader being one of them. The C-1 (originally the TF-1) was outfitted to carry nine passengers or 3500 pounds of cargo and first flew in January 1955. Through out the 1960s and 1970s the C-1 Trader carried mail and supplies to aircraft carriers on station in the Pacific Ocean during the Vietnam War and also served as a trainer for all weather carrier operations. Over its production life 83 C-1 Traders were built plus four EC-1A Tracers which were converted into electronic countermeasure aircraft. The last C-1 was retired from US Navy service in 1988 though approximately ten are still operated as vintage war birds.