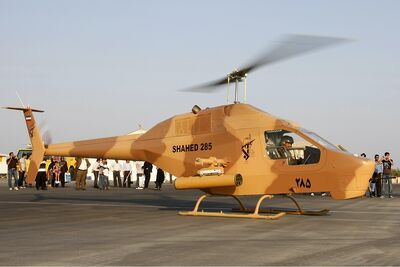 The HESA Shahed 285 is an Iranian light attack helicopter developed from the Bell 206 JetRanger.

The Shahed 285 was designed as an armed scout aircraft variant of the illegally produced Panha Shabaviz 2061, an unlicensed copy of the Bell 206. It was revealed by Iranian authorities in 2009, with two main variants: the AH-85A, a land based variant, and the AH-85C, a sea-based variant. The aircraft is beginning to enter service, but has not yet seen actual combat.