The Hellenic Air Force (HAF) (Greek: Πολεμική Αεροπορία, Polemikí Aeroporía, literally "Military Aviation") is the air force of Greece. It is the second largest Greek military branch and has about 33,000 personnel and additionally 30,000 are reserve. The Greek Air Force operates over 510 aircraft.

The Hellenic Air Force was founded in September 1912 (Army Aviation; 1930 as sepparate service) as the third Greek military branch. It took part on the following conflicts:

Unfortunately, Greece spent a lot of money to upgrade its military over the last years, actually too much, the reasons were Turkish airspace violations and aircraft which flew over Greek Islands, so that Turkey was considered as a very dangerous threat. Only on one single day, 29 airspace violations were made and a Greek Mirage 2000 downed on 8th October 1996 a Turkish F-16D, but in 2006 a Greek pilot crashed into a Turkish plane, while trying to intercept it.

A HAF A-7 Corsair II taking-off. 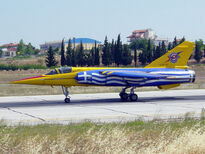 An A-7 Corsair II anniversary edition. 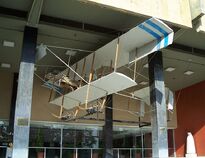 The Henri Farman was the first aircraft to be used by the HAF.

A HAF F-4F Phantom II anniversary edition.
Add a photo to this gallery
Retrieved from "https://aircraft.fandom.com/wiki/Hellenic_Air_Force?oldid=10737"
Community content is available under CC-BY-SA unless otherwise noted.