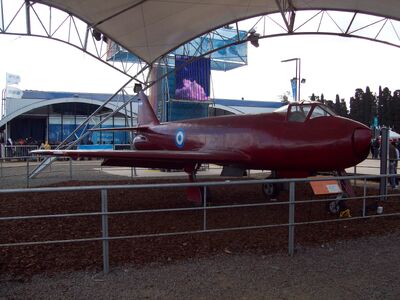 The fuselage was semi-monocoque with elliptical cross-section housing a single Rolls-Royce Derwent 5 engine with the air intake in the nose and the ducting surrounding the cockpit. The reduced internal fuselage volume forced the fuel tanks to be installed in the wings, which resulted in a significant reduction of its range.

The prototype flew on 9 August 1947 with test pilot 1st. Lt. Osvaldo Weiss at the controls. The history of this aircraft was brief, as its performance was considered unsatisfactory and in the meantime the studies for the more evolved FMA IAe 33 Pulqui II were quite advanced. Nevertheless, its role in the history of aviation is quite significant as it was the first jet combat aircraft developed and built in Argentina and Latin America. This made Argentina the 5th nation in the world to accomplish this task by itself.