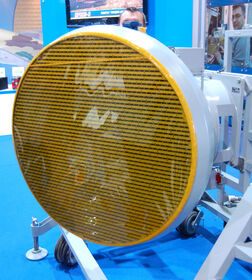 The Irbis-E has a detection range of 400 km against a 3 m² target, its cited detection range against 0.01 m² targets is 90 km. The Irbis-E is able to perform ground mapping, allowing it to take out up to four ground targets, while searching for airborne targets in the air, simultaneously.