The JF-17 Thunder/ Chengdu FC-1 Fierce Dragon, is from it´s designation a 4th Generation Jet Fighter, that was

developed by China and Pakistan. It has improved BVR (Beyond Visual Range) capabilities. In 2011 the PAF put Block II versions of this fighter on order which cost 20-25 million dollars as compared to the Block-I's cost of 15-20 million dollars. The Block-II fighters are the 4.5 Generation variant equipped with AESA radars, possibly Chinese, improved ECM suites, and IRST systems. Also believed to incorporate greater use of composite materials for reducing airframe weight, radar absorbing material, and possibly a WS-10B thrust vectoring (TVC) engine.

The first JF-17/FC-1 prototype was finished on 31st May 2003 and first flown on 25th August 2003. The last flight of the 4th prototype was on 28th April 2006. The Aircraft is designed and manufactured by Chengdu Aircraft Industry Corporation (CAC) and Pakistan Aeronautical Complex (PAC). The Pakistan Air Force (PAF) plans to induct 150-250 JF-17's. All Block-I fighters will reportedly be upgraded to Block-II.

The JF-17/FC-1 is often called J-9 but this is a completely other aircraft.

A JF-17 taking off from a runway 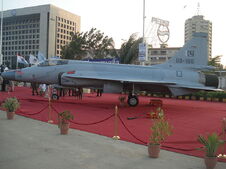 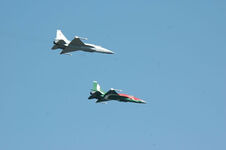 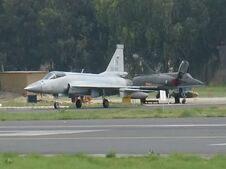 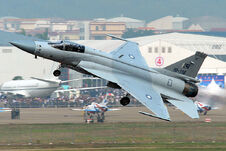 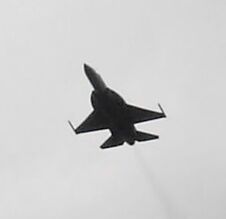 Underside of a JF-17
Community content is available under CC-BY-SA unless otherwise noted.
Advertisement