The Junkers Ju 87 was a German dive bomber that was used in World War II, primarily used for precision bombing.

lt was a large aircraft for its intended role, and had a crew of two. (Pilot + Tail gunner) The most terifying feature of the Stuka was its siren. As the Stuka dived towards its target, it made a high pitched screaming noise, that often stunned people to the point where they just stood there and watched. However, by the Battle of Britain, most Stuka units had the sirens removed from the aircraft to reduce drag.[1]

The Nazis made extensive use of the Ju 87 during the early "Blitzkrieg" campaigns. While the Ju 87 Stukas (the nickname was abbreviated from Sturzkampfflugzeug, meaning "dive bomber in German) attacked from the air, men marched alongside Panzers, smashing the vastly inferior Polish forces.

In addition to dive bombing, Ju-87's were also employed as anti-tank aircraft, utilising a pair of 37mm cannon.

Towards the end of the war, the type's vulnerability led to it being replaced by specialised examples of the Focke-Wulf Fw 190. 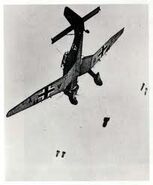 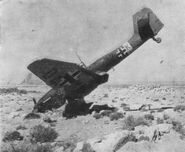 Unknown location, Libya, September 1941. (For Italian profile look into Italian section). Aircraft was captured by British troops in September in the Libyan desert. Interpreting period b/w photographs, the codes are painted in yellow. However, some sources claim these were white, the photographs not enabling a definite identification to be made. Strangely enough, the Italian Stukas never received a desert camouflage scheme as their German counterparts did, and flew in their original 'continental' colours in North Africa. Note that although British roundels and fin flash have already been applied on this Ju 87, it still retained its previous Italian markings of wing fasces and white tail cross at this stage. (Camouflage: RLM70 Schwarzgrun/RLM71 Dunkelgrun upper surfaces with RLM65 Hellblau undersides).
Add a photo to this gallery
This article is a stub. You can help the Aircraft Wiki by expanding it.

Retrieved from "https://aircraft.fandom.com/wiki/Junkers_Ju_87?oldid=14296"
Community content is available under CC-BY-SA unless otherwise noted.