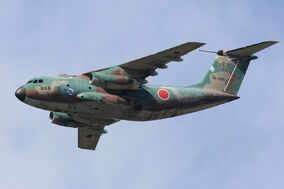 The Kawasaki C-1 is a twin-engined short-range STOL military transport, used by the Japan Air Self-Defense Force. Development began in 1966 as the JASDF sought to replace its aging, World War II–era C-46 Commandos. The C-1 entered production in 1971, and remains in use today.

In 1966, the JASDF transport fleet was composed primarily of Curtiss C-46 Commandos, a retired midwar American design built in large numbers before the end of World War II. While relatively capable for its time, the C-46 did not fare well in comparison to newer aircraft such as the Lockheed C-130 Hercules, and the JASDF therefore elected to replace it with a domestically-designed and -manufactured transport aircraft.

For this purpose, they turned to the Nihon Aircraft Manufacturing Company, a consortium of several major corporations, which had begun to produce commercially its YS-11 airliner four years earlier. NAMC decided that Kawasaki Heavy Industries was to be the prime contractor, and the airplane thus bears that company's name. Fully developed by Kawasaki Heavy Industries and Japanese design, this aircraft has been used as military transport for the Japan Self Defense Forces since its maiden flight in November 1970.

Japanese policies at the time on military equipment were strict in that they were not to have offensive capabilities, and so the maximum range was cut in order to keep the aircraft's operational range inside Japan. This proved to be a problem after Okinawa was returned to Japan from the US, and the aircraft had trouble reaching the island from distant areas. Thus production was terminated and the C-130 was introduced.

The Kawasaki C-1 has been in use since 1974. An aircraft yet to be presented is to replace the service of the C-1 by 2010 to provide a new range of military transport services for the Japan Self Defense Forces.

The only example built is currently on display in Kakamigahara Museum in Gifu, Japan.

Retrieved from "https://aircraft.fandom.com/wiki/Kawasaki_C-1?oldid=12216"
Community content is available under CC-BY-SA unless otherwise noted.