The F-35 Lightning II was the winner of the Joint Strike Fighter program. It is a single-seat single-engine multi-role fighter under development. The F-35 is intended to carry out ground attacks, reconnaissance, and air defense missions with stealth capability. Furthermore, it is considered the first stealth multi-role fighter.

The origins of the JSF program date back to the Soviet era and given advancements in their air defense technologies. With the following collapse of the Soviet Union, these problems in terms of Close Air Support Capabilities remained. For example the A-10 being too slow and the and the A-7 having insufficient fuel capacity. F-16s equipped with a head steered thermal imaging turret seemed to be a solution for the problem. However with Operation Desert Storm during the 1980's, the weaknesses in terms of strike capability got even clearer, showing an inadequacy in terms of combat radius of the F-16. As a result, each, the Air Force, the Navy and the Marines voiced their respective requirements for a new multirole strike aircraft.[1]

The resulting aircraft should also include similar stealth capabilities to the already existing F-22 Raptor fighter, while carrying a majority of its payload internally and being cheaper to produce than the F-22.[2]

Eventually, the Joint Advanced Strike program was launched in 1993. It was then decided that the new aircraft should be single engine and single crewed. Shortly after, Boeing, Lockheed Martin, McDonnell Douglas, and Northrop Grumman accepted to start research for the given program, with Northrop Grumman and McDonnel Douglas soon joining eachother. In August 1995, the program was renaimed to Joint Strike Fighter (JSF), after fusing with DARPA's  Advanced Short Take-off and Vertical Landing (ASTOVL) program. As a result, the Royal Navy gained and interest and soon joined, as they were looking for a successor to their Sea Harriers.[3]

In 1996 Lockheed Martin's and Boeing' proposals were awarded as the early winners to built their prototypes the X-35 by Lockheed and the X-32 by Boeing had been made. The X-35 absolved its first flight on October 24th, 2000, while the X-32 had its maiden flight a bit earlier on September 18th.

Both designs where able to fullfill the given requirements. However Boeings aircraft showed to be too high in risk, regarding its complex STOVL system. In addition to that the X-35 proved to have superior flying characteristics, partly due to being less heavy than the X-32.

One of the main aspects, that differs 5th generation fighter like the F-35 or the F-22 from 4th generation fighters, is the implementation of sensor fusion. What this means is, that all the data which is collected by each system on the aircraft is melted into a bigger picture to greatly increase the pilot's situational awareness. However, these are not the only advantages gained from sensor fusion. It allows to add in information that couldn't directly be received from a single sensor.  Another great advantage is that information can be shared with allies much more easily. This allows a group of F-35's to see the same picture, based on all their collected data. [4]

A major source of harsh criticism towards the F-35 has always been its performance, that it would not be able to live up to the costs it produces. But more so, its Visual Range performance has been claimed to be highly inadequate due to poor manoeuvrability.

However the results of the recent simulated deployment exercise, in which a group of F-35s was intended to perform close air support, a different picture has been given. During the exercise, seven F-35s were supposed to penetrate a highly contested airspace defended by 8 F-15E Strike Eagles. They were able to hit 15 out of 16 bombs on target, while fearing zero losses in dogfights. [5]

During an interview with four USMC pilot who got to fly the F-35 first hand, several positive comments have been made regarding its sophistication in terms of situational awareness and controllability. For example: "And I thought, “Holy Cow!” here I am coming back to the field from a simple familiarity mission and my jet is telling me everything about the operational environment I am about to go into. [...] The F-35 was hovering better than I could ever hover a Harrier without doing a thing. [...]"-Col. John “Guts” Price

"I have enough situational awareness to assess whether Red Air is going to be a factor to me by the time I release the weapon. I can make the decision, I’m going to go to the target, I’m going to release this weapon. Simultaneously I pre-target the threat, and as soon as I release the A2G weapon, I can flip a switch with my thumb and shoot the Red Air.[...]"-Col. Rich “BC” Rusnok Furthermore the pilots have described the changes in comparison to 4th generation fighters as a "quantum shift". The F-35 does so by taking away a lot of stress from the pilot through its technological equipment, allowing him to concentrate on the actual mission. [6]

The F-35 cockpit. Note the lack of a HUD (Heads Up Display.)

An F-35C, with its wingtips folded up.

The F-35B, displaying its hovering ability. 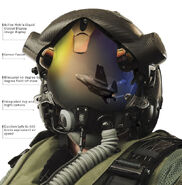 The helmet used with the F-35.