Start a Wiki
The Lockheed Martin RQ-3 Dark Star ( also called Tier III-Minus ) is an Unmanned Aerial Vehicle developed in a Joint-venture by DARPA, Lockheed Martin´s Skunk Works and Boeing. However the project was terminated in 1999 by the Department of Defense, because it didn´t have enough range and armament to be successful in combat.

The first flight of the RQ-3 was on 29th March 1996. The first time it was shown on display was on 1st June 1996. The prototype crashed in the same year. The second prototype was built in 1997 and first flown in 1998. It has sensor fusion and was equipped with a Synthetic Aperture Radar. It had Stealth Abilities to be harder to track by enemy Radar.

The aircraft was able to fly completely autonomous, it had a range of 500 miles and it had a flight time of 8 hours. After finishing a mission it would fly autonomously back to the base. It was designed to be a tactical reconnaissance aircraft, able to corporate with the RQ-4 Global Hawk ( Tier II-Plus ). Because of budget reasons the program was cancelled in 1999.

Rumors state that during the Iraq-War a more advanced RQ-3 DarkStar variant has been used. Details of that are classified. But still some information is known: This variant is somewhat larger and with a lowered IR-signature. In terms of Avionics it has like the F-22 an LPI-Radar and Data-links, Electro-optical sensors are also included. The received data is transfered using satellites, but the antenna is monted on the top of the Aircraft to protect it against enemy Signal Intelligence sensors. They were built only in small numbers an haven´t entered operational status.

The DarkStar on the Museum of Flight in Seattle 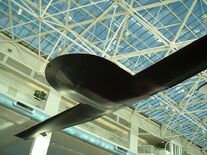 RQ-3A at the Museum of Flight 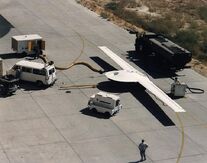 RQ-3 DarkStar based on Dryden Flight Research Center on Edwards AFB
Add a photo to this gallery
Retrieved from "https://aircraft.fandom.com/wiki/Lockheed_Martin_RQ-3_DarkStar?oldid=16400"
Community content is available under CC-BY-SA unless otherwise noted.