The SR-71 Blackbird was a United States air force reconnaissance and spy aircraft with stealth abilities, it was derived from the Lockheed A-12 interceptor and it is the current speed record holder for manned air breathing aircraft . It was used by NASA and the CIA.

Life support was needed since the SR-71 cruises at about 80,000 feet which is very high. The plane tended to leak fuel while it was standing on the ground. It was due to cooling down fule tank seals. If you put a human in that altitude they would die about 5-15 seconds later because of a loss of oxygen. To counter this, pilots would wear a pressure suit for oxygen and anti-pressure. The suit was also used for touching the keyboards because the plane gets very hot when it is at mach 3.2 (due to air friction.) The pressure suit was a good suit for SR-71 pilots, and soon in the early 1980s people started using it on the Space Shuttle. It's last flight was in 1999, and has since been on display in museums.

It has been seen and mentioned in the 2009 live-action film sequel Transformers: Revenge of the Fallen, which had been the old Autobot Jetfire, who had destroyed most of the Smithsonian Museum of Air and Space. 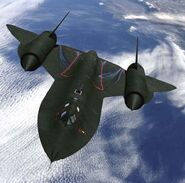 Lockheed SR 71 Cockpit
Add a photo to this gallery

Retrieved from "https://aircraft.fandom.com/wiki/Lockheed_SR-71_Blackbird?oldid=16407"
Community content is available under CC-BY-SA unless otherwise noted.