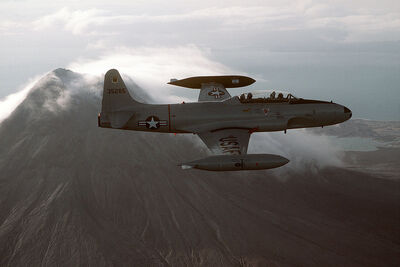 The Lockheed T-33 Shooting Star, nicknamed the T-Bird, is an American training aircraft developed from the P-80 Shooting Star.

The T-33 was based on the airframe of the P-80, the first jet aircraft to fully enter service with the US Army Air Force. Differences include a lengthened fuselage, additional instrumentation, and an additional seat. The initial conversion, serial 48-356, first flew at Van Nuys, California as the TP-80C, with Test pilot Tony LeVier at the controls, and crew chief Robert Spohn in the rear seat, on March 22nd, 1948. Entering production in the same year, the type became the TF-80C on 11th June 1948, before being redesignated T-33A on 5th May 1949.[1]

The T-Bird was primarily used as an advanced trainer, and has seen service with many countries and private owners, some of which still operate it today. Production ended in 1959, with 6,557 built. The T-33 was also license-built by Canadair as the CT-133 Silver Star, and had several major variants and developments including the T2V SeaStar, the F-94 Starfire, and the Boeing Skyfox.

Retrieved from "https://aircraft.fandom.com/wiki/Lockheed_T-33_Shooting_Star?oldid=14286"
Community content is available under CC-BY-SA unless otherwise noted.