The Lockheed YF-12 was a test aircraft created by Lockheed Martin for the United States Air Force, based on the high

altitude flying reconnaissance aircraft, Lockheed A-12 OXCART. Only three units of this Interceptor aircraft were built, before the program was terminated.

After the XF-108 was cancelled due to financial problems, Lockheed was able to interest the Air Force in a Mach 3 Interceptor, based on the A-12. The Aircraft was designed to replace the Convair F-106 Delta Dart. As being part of the Long Range Interceptor Experimental program, it´s competitor, the Mach 3 North American XF-108 Rapier was at first declared as the winner. But this airplane was cancelled by the Department of Defense in the year 1959 due to high cost. So the US Air Force decided to built 3 prototypes. On 7th August 1963 the first YF-12 was flown. But buying 93 modified YF-12B was prevented by Defense minister Robert McNamara. Reasons for that were high cost and the fact that the USSR don´t has any bomber that would call for an airplane with such a high speed.

Of the three built units only one is excisting today. This YF-12 is standing on the National Museum of the United States Air Force, on Wright-Patterson AFB. One aircraft was damaged in 1966 due to a fire on Edwards Air Force base and later modified into the SR-71C Blackbird. The third aircraft was destroyed due to a fire in flight on 24th June 1971, but the pilots were able to escape using the ejection seat. 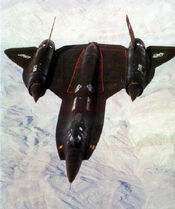 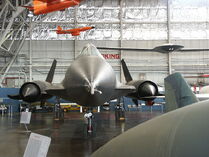 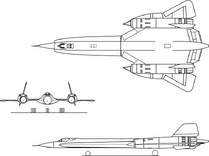 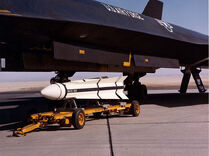 An AIM-94 of a YF-12
Community content is available under CC-BY-SA unless otherwise noted.
Advertisement