The Luftwaffe (“Air Arm”) is the Air Force of Germany, being responsible for the security of German airspace and the defence of the country, the Luftwaffe solely has defensive tasks, just like the Japanese Air Self-Defence Force, because both started World War II, to prevent them starting a new War. It was founded on 9th January 1956; from 1945 to 1956, there was no German Air Force and before 1945, in World War II, the Luftwaffe was part of the Wehrmacht, the German Armed Forces of this time, now they are called Bundeswehr.

The Luftwaffe currently operates 428 aircraft and 35,559 personnel; the flagship plane is currently being the Eurofighter Typhoon.

A Transall C-160D of the Luftwaffe.

A double-seat Eurofighter Typhoon of the German Air Force. 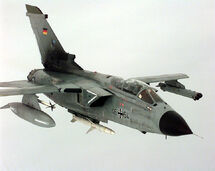