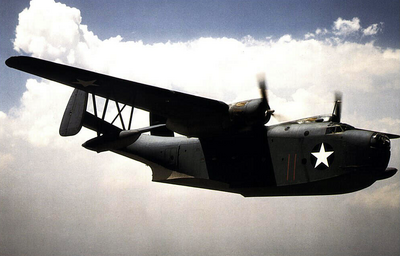 The Martin PBM Mariner was an American twin engine flying boat used during World War II. It was made by the Glenn L. Martin Company, and around 1,285 were built.

The PBM was designed to replace Martin's earlier P3M and complement Consolidated's PBY Catalina. It was first known as the Model 162, and was first ordered on June 30th, 1937 as the prototype XPBM-1. The aircraft first flew on Febuary 18th, 1939, and entered service in September, 1940.

When the war started, the Mariner was used mostly as a patrol bomber by the United States Navy. They were used for anti-submarine patrols after the attack on Pearl Harbor, and claimed at least 10 submarines during the war. The PBM was also used by the US Coast Guard as a search and resuce aircraft. It was additionaly exported to many foreign countries, such as Great Britain, the Netherlands, Australia, and Argentina, which used them for similar purposes. The aircraft was finally removed from service in 1964 by Uruguay, the last country to operate them.