The RSK MiG Skat is a prototype of an Unmanned Combat Air Vehicle. A 1:1 model of the Skat was

published the first time at MAKS 2007. The Skat is a flying-wing design with Stealth abilities.

he design of the Russian Aircrat Corporation MiG ( alias MiG Skat ), prevailed against the competing design by Sukhoi.

The goal of the Skat UCAV is to study and to get experience with Stealth technology and experience with autonomous operating aircraft, to balance the technological residues of the 1990s, which arised due to financial problems. The Skat is the first Russian Next Generation UCAV, that was first shown publicly at the MAKS 2007.

The Skat UCAV is intended to carry weapons in two ventral bays sized to carry missiles as large as the Kh-31.

During flight testing, the MiG Skat should be used against not moving targets. But it will be also able to destroy moving ground and see targets.

Alongside the Unmanned Skat-D, a manned version ( Skat-PD ) was planned as well, but development was cancelled.

The flying wing design of the Skat with a wingspan of 10m is very similar to the American Northtrop B-2 Spirit, and is likely the source of its name (Skat translates to "Stingray" in English). The fuselage of the aircraft is made of composite materials. Because of its tricycle landing gear the Skat is able to take-off and land on conventional runways.

The Skat is powered by a RD-5000B turbofan engine, which is a modified derivative of the Klimov R-33D, used on the MiG-29 Fulcrum. For the Skat the afterburner was removed and the engines were flattened. The inlets are on the top of the fuselage. It has a maximum thrust of 49,4 kN. So that the Skat is able to reach a top speed of 800 km/h with a maximum take-off weight of 10 tons, at altitude. The Skat is expected to have a service ceiling of 12,000 m and a range of 4000 km.

The Skat will be able to carry 2 tons of armament in two internal weapon bays. It should be equipped with Air-to-Surface missiles, Glide bombs, Cruise missiles and anti-radiation missiles. 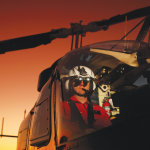