The Mil Mi-24 ( NATO codename: Hind ) is an Attack Helicopter developed in the Soviet Union. It was designed and manufactured by Mil Moscow. Russian pilots nicknamed it летающий танк (letajuschtschi

tank, "flying tank" ) or Крокодил ( "Crocodile", because of the exterior paint ), as well as Стакан (Stakan, or "glass" because of the large glass canopy, especially on the Mi-24A ).

The Mi-24 is powered by two gas turbine engines and has a five-blade main rotor. The Mi-24 is based on the Mi-8, but the fuselage was completely redesigned.

The Mi-24 is used in all sorts of warfare as well as escorting allied air units. Unlike other Attack Helicopters, the Mi-24 is able to act as a low-capacity transport helicopter, able to carry up to 8 soldiers.

Being a rare combination of a gunship and troop transport, the Mi-24 has no direct NATO counterpart. The most similar helicopter (in terms of usage) would arguably be the Russian Ka-29TB, a variant of the Ka-27.

Drawing of the Mi-24 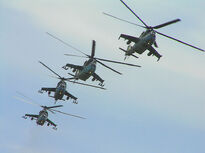 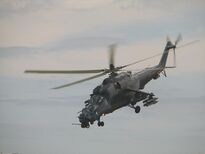 Mi-24 with 30-mm guns
Add a photo to this gallery
Retrieved from "https://aircraft.fandom.com/wiki/Mil_Mi-24?oldid=10582"
Community content is available under CC-BY-SA unless otherwise noted.