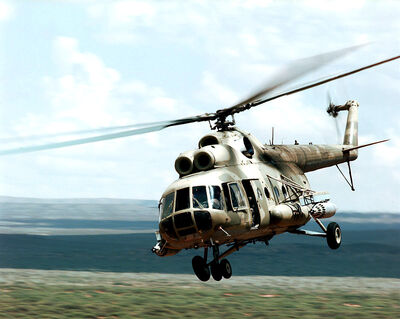 The Mil Mi-8 (NATO reporting name: "Hip") is a Russian multi-purpose helicopter designed by Mil Helicopters. It is the most-produced helicopter in history, with over 17,000 built so far and production still ongoing. It is most commonly used as a transport helicopter or gunship.

The Mi-8 was based on Mil's earlier Mi-4, with an enlarged cabin. Design work began in 1960, and the first prototype (known as the V-8) flew on July 7th, 1961. The aircraft entered service in 1967 after having the number of rotors it used changed from four to five.

The Mi-8 has been used by over 50 different countries since its introduction in various roles and for a number of purposes. It has been used in wars as a troop transport or attack aircraft, notably in the Vietnam War by the Soviet-backed North Vietnamese. It has also been operated as a civilian helicopter by various airlines and private owners. Aside from Russia, other major users of the Mi-8 include China, Cuba, India, and Poland. The Mi-8 is still being made today.