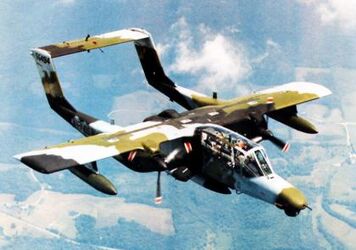 The North American Rockwell OV-10 Bronco is a double-seat attack and reconnaissance aircraft developed by North American Aviation and Rockwell International. It was used by various branches of the United States Military until 1995 and is still used by NASA and foreign countries.

The Bronco was first developed in the early 1960s as the NA-300 in response to a Light Armed Reconnaissance Aircraft specification set by the US Army, Navy, and Air Force. The design was selected in 1964 and first flew on July 16th, 1965. The OV-10 was introduced into service in October 1969 and would become one of the most successful counter-insurgency aircraft of the following three decades.