The North American XF-108 Rapier was a double seat, supersonic interceptor aircraft with an increased range. The project was contracted by the US Air Force in the year 1957 and cancelled before the first prototype could be built.

It was designed to intercept Soviet bombers over the Arctic, before they can reach US air space, as well as escort flights for the XB-70 Valkyrie.

Development of the F-108A begun in the year 1955 for the LRIX (Long-range interceptor, Experimental) program. It was designed to replace the failed Republic XF-103. On 6 June 1957 North American Aviation was contracted to built two prototypes of a Supersonic interceptor, which was called NA-257. The North American Aerospace Defense Command (NORAD) called for 480 units.

The project was cancelled on 23 September 1959, because of financial problems and the Soviet bombers were no longer the only problem for the United States, the intercontinental nuclear weapons of the USSR were more dangerous- and the F-108 was useless against them.

An artists conception of two F-108A based on Elmendorf AFB, Alaska 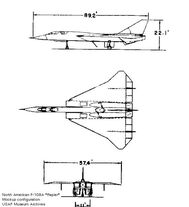 Drawing of the F-108
Community content is available under CC-BY-SA unless otherwise noted.
Advertisement