The Northrop F-20 Tigershark was a related development of the F-5 Tiger, leading to the aircraft initially being designated as the F-5G.

In terms of performance, the Tigershark was inferior to the F-16 Fighting Falcon, so the US Air Force did not order the F-20 and the program was cancelled.

The design of the F-20 is based on the F-5, but this time an Electronic Flight Instrument System (EFIS) cockpit was included. To reduce unit and maintenance cost, it was equipped with only one General Electric F404-GE-100 engine, which is more powerful then the twin-engines of the F-5. Even if the two prototypes were lost, the F-20 has a reliability of 97 per-cent. The F-20 showed much greater performance than its precursor, the F-5, and even better than expected.

At first, three aircraft were built; the first fitted with a standard F-5 style canopy and nose radome, while the second and third examples each had a larger blown canopy and larger nose radome for the GE G-200 Radar unit.[1] The flight of a prototype was in August 1982. After two aircraft were lost, Northrop started building a fourth prototype. But after the US Air Force selected the F-16 Fighting Falcon, development was cancelled.

Other countries including Germany and Switzerland were interested in the aircraft, primarily due to an export ban on production standard F-16As which was lifted by the Regan administration in the early 1980s.[1] South Korea and India tried to buy the rights and designations of the aircraft. However, the United States Congress prevented a technology transfer because that would lower the export chances of the F-16 Fighting Falcon. Shortly after, Northrop gave up on the F-20 Tigershark program. 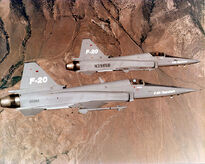 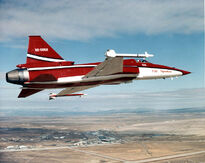 A F-20 painted in Northrop colours (Possibly the first prototype) 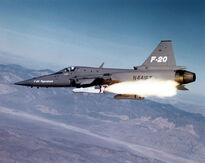