Start a Wiki
This article is a stub. You can help the Aircraft Wiki by expanding it.

The Northrop P-61 Black Widow was one of the USAF's best night fighters during World War II. Introduced in 1944; it saw action in the Pacific Theater. It's twin-boom design gave it excellent stability. It had a defensive turret just above the cockpit; which housed 4 Browning M2 50. Cal machine guns. It was also armed with 4 Hispano 20mm cannons in the nose. Over 742 P-61's were built.

To this day; only 4 of these iconic aircraft survive. 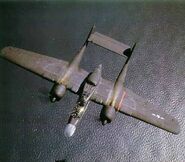 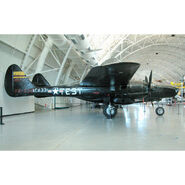 Add a photo to this gallery
Retrieved from "https://aircraft.fandom.com/wiki/Northrop_P-61?oldid=18706"
Community content is available under CC-BY-SA unless otherwise noted.