The YF-23 was the competitor of Lockheed's YF-22 in the Advanced Tactical Fighter Project, which was won by it and which was developed into the F-22, the new air-superiority fighter of the US Air Force.

Both ATF competitors were excellent aircraft but the decision of the Air Force to chose the YF-22, instead of the YF-23 was right. Of course it´s true that the YF-23 was a stealthier and probably faster design, but the YF-22 was much more manoeuvrable, mainly because of the vectoring nozzles, which cannot be added on the YF-23. It seems that the USAF preffered manoeuvrability over stealth. The reason for that is that anhighly manoeuvrable aircraft is more survivable, while the YF-22 could outmanoeuvre enemies with ease, the Black Widow would´ve struggled with doing that (this goes only if the enemy has TVC, like Su-35, PAK-FA etc. but conventional aircraft would be outmanoeuvred by the YF-23) and it was also able to dodge missiles much easier than the less manoeuvrable Black Widow would have done it. But high manoeuvrabiltiy wasn´t the only single advantage of the YF-22, it also had much more advanced cockpit technology and electronics, while the Black Widow had the same cockpit as the F-15 Eagle, bisanother disadvantage. And concerning the weapons bays, the volume of the YF-22´s was larger than the YF-23´s, so that more missiles could be fitted, but it is true that the YF-23´s bay was deeper, allowing it to carry its weapons one over another, but this is too risky because if one missile is jammed the other one behind it is automatically jammed as well. The next disadvantage of the YF-23 was that it was actually only a technology demonstrator and Northrop focused it´s work on the unbuilt EMD F-23, a big mistake because Lockheed´s design was very close to production, only a few changes had to be made and it could enter service, but however Lockheed completely redesigned their design to make it more aerodynamical, stealthier and manoeuvrable.

A proposed naval variant of the YF-23 known as the NATF-23 was also considered as an F-14 Tomcat replacement. The design of the NATF-23 was different than the YF-23. It had conventional twin tails and front canards for landing on aircraft carriers and thrust vectoring nozzles. The intakes were also different and was to have a wider 48ft wingspan and a 62ft fuselage[1][2]. 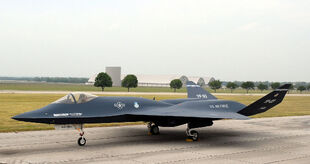 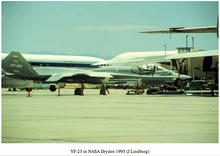 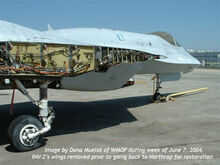