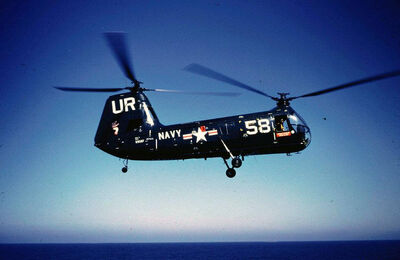 The Piasecki HUP Retriever (or H-25 Army Mule) was an American tandem-rotor utility helicopter developed by Piasecki Helicopter in the late 1940s.

Design work on the Retriever began in 1945, when the US Navy began a competition for a compact utility helicopter that could be operated from large warships such as aircraft carriers or battleships. The first prototype, the XHJP-1, first flew in March, 1948. The design was selected, and it entered service in 1949.

The HUP was used mainly for transport and search and rescue operations. It remained in US service until 1964, and also served with the French and Canadian Navies.

Retrieved from "https://aircraft.fandom.com/wiki/Piasecki_HUP_Retriever?oldid=11022"
Community content is available under CC-BY-SA unless otherwise noted.