In aerobatics, Pugachev's Cobra (or Pugachev Cobra) is a dramatic and demanding manoeuvre in which an airplane flying at a moderate speed suddenly raises the nose momentarily to the vertical position and slightly beyond, before dropping it back to normal flight. It uses potent engine thrust to maintain approximately constant altitude through the entire move The manoeuvre supposedly has some use in close range combat, and is an impressive trick to demonstrate aircraft's pitch control authority, high angle of attack (AOA) stability and engine-versus-inlet compatibility, as well as the pilot's skill. The manoeuvre is named after the Soviet test pilot Viktor Pugachev, who first performed the manoeuvre publicly in 1989 at the Paris Le Bourget air show. Initially the Cobra was performed by Sukhoi 's test pilot Igor Volk while testing the new Sukhoi Su-27 fighter

In the case of the Su-27, the pilot initially disengages the angle of attack limiter of the plane, normally set at 26°. This action also disengages the g limiter. After that the pilot pulls back on the stick hard. The aircraft reaches 90–120° angle of attack with a slight gain of altitude and a significant loss of speed. When the elevator is centered, the drag at the rear of the plane causes torque, thus making the aircraft pitch forward. At that time the pilot adds power to compensate for the lift loss. In a properly performed Pugachev's Cobra, the plane maintains almost straight flight throughout the maneuver; the plane does not roll or yaw in either direction. While Pugachev's Cobra can be executed using only standard aerodynamic controls, it could be achieved more easily with modern thrust vectoring. In the latter case it would be an example ofsupermaneuverability, specifically poststall maneuvering. The Herbst maneuvering and the helicopter manoeuvre are other examples of the recent growing use of vectored thrust in 4.5 and 5th generation aircraft, manned as well as unmanned.

This manoeuvre could theoretically be useful when a combatant is being pursued closely by an opponent at a somewhat higher altitude. By executing the cobra, a pursued aircraft may suddenly slow itself to the point that the pursuer may overshoot it, allowing the previously pursued aircraft to complete the Cobra behind the other. This may give the now-pursuing aircraft an opportunity for firing its weapons, particularly if a proper pointing aspect (facing toward the former pursuer) can be maintained. Maintenance of the proper aspect can be facilitated when the aircraft employs thrust vectoring and/or canard control surfaces. The disadvantage of performing this manoeuvre is that it leaves the airplane in a low speed/low energy state, which can leave it vulnerable to attack from opposing aircraft. A related maneuvere is the Kulbrit. 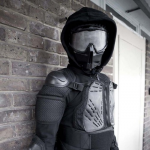