The Republic F-105 Thunderchief was a supersonic fighter-bomber of the USAF. It served as the dominant attack aircraft in the early stages of the Vietnam War. It has the unfortunate distinction of being the only plane in the USAF to be removed because of high loss rates. (Almost 50% deployed in the Vietnam War were lost.)

833 were produced, and the first flight was in 1955. It was quickly phased out by the USAF following the end of the Vietnam War and was officially retired in 1984. 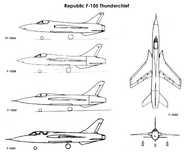